Dune - The Battle for Arrakis 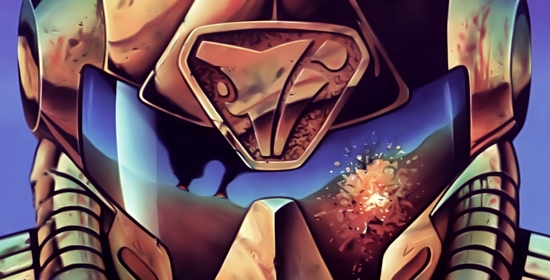 Dune (a.k.a. Arrakis) is the only planet that contains Spice. Spice enables Guild Navigators to "fold" space to make spacecraft travel possible without moving. For humans who consume it regularly, Spice prolongs life for hundreds of years. Consequently, whoever controls the Spice controls the universe.

Virgin Games gives you the opportunity to control the universe in Dune: The Battle for Arrakis. In this overhead-view strategy game, you command an army in a campaign to destroy your enemies and become Ruler of Arrakis.

You play Dune as the ruler of one of three noble Houses. Part of the fun and much of the strategy comes from improving this arid world. For example, you must build military installations from the ground up by laying foundations, installing power plants, and so on. Since you have a limited budget, you must harvest Spice and sell it for credits to continue building structures and weapons.

Meanwhile, your enemies are plotting your demise.

The political intrigue adds spice to the Spice. You must play through several military campaigns, which get progressively harder. You get various ground troops, including Dune's guerilla fighters -- the famous Fremen. Motorized armaments range from Trikes to Sonic Tanks, and your weapon choices grow as you win campaigns.

The controls in Dune are fluid. You pick your force, and then click on the enemy you wish to attack. Battles are fought in real time, too.

Visually, Dune is no stunner, but you can easily recognize every unit and building. The one thing that dampens the fun is slowdown when multiple units move on the screen together.

Spice up your Life

Dune is a great exercise for your brain. Even though this is a strategy game, nonstop action is the norm. If you aspire to conquer a planet, have some hot fun in the sun with Dune.

Скачать Dune - The Battle for Arrakis

The planet Arrakis - better known as Dune - is a desolate wasteland. But it's also the universe's only known source of Spice Melange, which can enhance your mental abilities and life span. In a gaseous state, it can also be used to "fold" space and warp anywhere in the universe. Padishah Emperor Shaddam 4 controls the flow of the spice, and when trouble arises from the evil Harkonnens, he sends the Atreides clan to Dune to keep the peace. As Paul Atreides, you must bring the local Fremen tribes together both to increase spice production and to battle the Harkonnens.

The designers at Virgin Interactive went out of their way to create an interactive movie - Dune has digitized graphics, spoken dialogue, and a full soundtrack. Unfortunately, you often feel that you're watching a movie instead of playing a game. The action ends up being too linear, and probably fairly boring for most gamers as well.

OK Sega CD owners! You didn't think for one minute that you'd be left out in the cold, did you? No way! It's Dune CD and this is a real trip! Use your menus to talk to people and extract information about the mystery which you must work to unfold. The Sega CD has never looked better. When you travel from place to place in your air vehicle, the CD special effects will make you air sick! It's that cool! Also, because of the CD quality audio, you get real music and real voices! None of that digitized stuff for you, no sir!

To really put the icing on the cake, this is not a quick run through the park! This is a long, difficult and very engrossing game. As a matter of fact, once you start playing and gather your information, the plot will keep you engrossed for many hours of playing time!

Once again, if you like the books and the movie, Virgin has you covered! This is about as close to true interactive entertainment as you can get! Remember, make haste to check out Dune CD for the Sega CD! You can thank us later!

Relive the magic of the hit movie Dune with Virgin's Dune II for the Genesis. You can take part in this interactive video adventure. Use your military might as you attempt to put an end to tyranny against the Fremen. You can travel to different locations and gather information to help you in your quest. All of the military simulation that you yearn for is here for the asking. It's very complex and very rewarding!

You will be absolutely amazed at the awesome graphics complete with incredibly vivid cinema sequences. You have got to see 'em to believe 'em! The music and sounds are even top-notch! The challenge factor is high, too! This is not your little brother's video game. If you were a fan of the movie and books, you will absolutely love this cart! Even die-hard fans of military simulators will find Dune II a more than challenging game.

Dune is more addictive than it would have you believe. I spent many hours playing this cart. It may not look all that good, but once you try it, you'll be playing it for hours. This is one of the most fun games I've played for a while. Unlike most strategy games, it's easy to learn. Even if your not into this type of game, I highly suggest it. Dune shouldn't be passed up. I really like House Ordos, but hate the worms.

I didn't believe that this version could match the fun factor of the PC version, but boy was I proven wrong! Dune offers strategy that has only been seen in games like Herzog Zwei, one of my all-time, favorites, and is extremely easy to learn to play. Playing as three different houses really helps the replay value as well. Strategy games don't come along every-day and Dune is one of those rare catches of the season.

I would usually turn away from a game like this, but found myself playing it as if would never get to review the other games. To get me started there was a very easy-to-learn tutorial of the game, so I didn't have to sit down and read a long and boring manual. There are loads of cool vehicles and terrain you can move. The many scenarios will keep you playing for hours on end. War sim fans will totally dig this.

I'm not usually a big fan of games like this, but this game is pretty cool. I like a game that takes some brainpower to win, and Dune takes some time and patience to perfect. Once you start, you're addicted! This is a very involving game. Some of the sounds get mighty repetitious after a while, but that's a minor complaint. Other than that, Dune offers great challenge and staying-power! Spice is Nice!

This lengthy graphic adventure is based on the best-selling book and movie Dune. Virgin managed to bring brilliant graphics and great sounds to the game, but not much more.

Using a first-person perspective that's similar to some role-playing games, you play as Paul Atreides (son of Duke Leto Atreides). The Emperor has sent you and your family to the planet Arrakis (a.k.a. Dune) to mine Spice. The Spice, called "Melange," is primo stuff. It prolongs life, expands consciousness, and enables Guild Navigators to "fold" space to make the starships travel anywhere without actually moving. Whoever controls the Spice, controls the universe!

The Harkonnens, the mortal enemies of House Atreides, are also on Arrakis mining the precious Spice. Your primary task in the game is to fight the Harkonnens for control of Dune by recruiting the local Fremen warriors to your side. Your ultimate goal is to help the Fremen achieve their dream of turning arid Dune into a flourishing planet.

You'll find that the action quotient is low in this game. You simply embark on various quests across the planet to find vital supplies and track down important personalities without much confrontation. Each quest does require you to interface with multiple characters, though.

Dune's graphics are simply stunning. They're possibly the best of any Sega CD game to date. Without a doubt, the BD flying sequences stand out, boasting great texture mapping. The great-looking cinematic sequences are dramatic, too, but they aren't very colorful. The sounds and music, as with most CD games, are fantastic. The music soundtrack has a nice variety. It sports an upbeat tempo with a Middle Eastern flair. Synchronized speech helps bring life to otherwise lifeless characters. Unfortunately, the speech is somewhat marred by the inconsistent pronunciation of frequently used words, the most jarring being "Harkonnen."

As appealing as Dune is to the eyes and ears, it takes its toll on your mind. At times, the game unfolds so slowly you feel yourself nodding off. The controls, fortunately, jerk you awake with their smoothness. The slow game play means timing is not an issue, so control is easy. The only negative control quirk appears when you fly an Ornithopter. Sometimes the computer grabs control to follow the terrain and you don't know who's in charge.

Not a Hot Dune

Although Dune has a great story line, high-powered graphics, and some sweet sounds, the game play is a weight to the overall game play. Dune has bright spots, but it'll make you thirst for more.

Dune II, originally titled The Building of a Dynasty (and renamed in Battle for Arrakis for Sega Mega Drive/Genesis in Europe) is a computer game released in 1992 by Westwood Studios. Dune II was considered a Real Time Strategy (RTS) game, and was followed by many other video games using the same style. Several other market hits, such as Command & Conquer, Warcraft, Age of Empires and Starcraft were built on Dune II's system.

The story follows Emperor Frederick IV of House Corrino, who is desperate for some spice melange which can be found on Arrakis, a different planet. He wants the melange so badly for being able to pay off all his debt. To achieve his objective, he offers the sole governorship of Arrakis to the Houses (Atreides, Harkonnen and Ordos). After all the three Houses arrive on Arrakis, the war begins.

The player controls a military commander from one of the three Houses. He is allowed to choose his preferred House. The player has to establish an unoccupied territory on Arrakis in his first missions, and to harvest spice and defend against opponents. Exactly like in the more popular games mentioned earlier, everything begins and extends from one building only.

The player's objective is to capture enemy territories and to dominate Arrakis on the map. The two other Houses will play together against you. After the player dominates the world of Arrakis, the final showdown will come. The player will have to fight against the two other Houses and Frederik's forces. The Sardaukar is an unplayable elite force worshipping Frederick. His heavy infantry is very powerful and dangerous. Depending on the House you've chosen, the final cutscene will be a different.

The gameplay is simple and very popular. The player uses his mouse to control what is happening on the map. In addition to the other Houses, sandworms are also dangerous for the player, and he will have to encounter them several times. The player can place his buildings on rocky terrain only. Structures deteriorate in time because of the weather, which is very realistic. This realism was quite unusual for video games at that point in time.

The game was received very well by the users, and that's also why it's been considered since then as a pioneer of real time strategies. However, the Amiga version of the game, released in 1993, was the best one. It was rated with 85% by CU Amiga magazine, thanks to its smooth gameplay and controls. The game received Amiga User International's Game of the Month award in September 1993. Only one reader rated the game on IGN, and offered an 8.8 feedback.