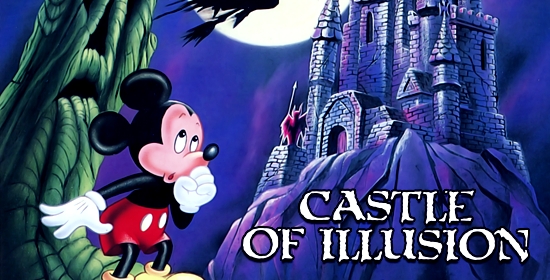 America's favorite cartoon star is the lead character in this run and jump action game. You must rescue Mini from the clutches of the witch Mizrabel before it's too late.

Mickey Mouse Castle of Illusion - While Mickey and Minnie Mouse are enjoying a rare day off, Minnie is suddenly kidnapped by the evil Witch Mizrabel and taken to her Castle of Illusion. Now it's up to you, as Mickey, to locate the Castle, defeat the Witch, and return Minnie to safety. You must find seven gems that are hidden somewhere inside the huge chambers and underground mazes of the Castle in order to free Minnie. You'll be up against hungry Bonefish, deadly ghosts, vicious bats, noble knights, and fire-breathing dragons on your quest to save your girl. You'll have to run, jump, swing, and slide your way through level after level of perilous situations as you hunt down the seven gems and prepare for the final showdown with Mizrabel herself.

Well Mickey, it used to be fun. Just you and Minnie living happily in cartoonland. But now all of that is over as the wicked witch Mizrabel has kidnapped poor Minnie and taken her to the dreaded and mysterious Castle of Illusion. You know that place, it's where all of the toys you played with in your past episodes live. They have come to life and now are out to get even with you! Somehow you must get the seven jewels of the rainbow. They will give you the power to defeat Mizrabel!

Your quest starts out in the black forest with bats and walking mushrooms. Then it's on to the spider webs and back to the dark and spooky forest. The second round is in toy world where wooden soldiers and jack-in-the-boxes come after you. Bounce across the jello and into the topsyturvy world where everything flips upside down. Grab the gem and move on to the jungle which is filled with waterfalls, rushing rivers of water and hungry fish. Next it's into the library where bookworms, dancing letters of the alphabet and falling books come after you. Go into candy world filled with ice cream, cookies and cakes, then back to the library where you swing on the pull chains of the lights, turning them on and off. The castle labyrinth follows and you must avoid suits of armor, a huge rolling ball and lots of bats as you cross the skull bridge. Swim through another labyrinth and Minnie is in sight, but first you have to defeat the evil Mizrabel herself!

Mickey Mouse makes his Genesis debut in a fabulous new adventure game. Mickey's girlfriend Minnie has been kidnapped by the evil witch Mizrabel and taken to her castle. You as Mickey must make your way through numerous levels of very detailed scenes from many of the past Disney animations. Take on the toy soldiers, avoid the walking broomsticks, and dodge the bees as they buzz you from above. Superbly detailed graphics and spectacular soundtrack.

Wham! A bolt of lightning crashed down from the sky, and before he had a chance to react, Minnie was gone. He looked up in time to see the wicked witch Mizrabel flying into the sunset with Minnie in her bony old fingers. The old witch is jealous of Minnie's beauty and plans to steal it from her. The only one who can save Minnie is Mickey, but first he must get past the Masters of Illusion and retrieve the seven Gems of the Rainbow in the Castle of Illusion.

This strategy guide deals with the first three levels of the Castle of Illusion. Next month we'll lead you through the rest of the game. Good luck!

Minnie has been kidnapped by the evil witch Mizrabel. You must collect the seven gems of the rainbow in order to rescue her.

Mickey Mouse makes his Genesis debut in a phenomenal new adventure game. Combine perfect animation, spectacular sounds and realistic parallax scrolling, with some of the best graphics ever seen on the Genesis and you can only begin to picture how well done this cart is. Throw in new techniques like screens that 'flip' (as do the controls) and the 'layering' of graphic screens to duplicate the translucent look in water! It's 7 levels up to and into the enchanted castle fighting with jack-in-the-boxes, toy airplanes, clowns and toy soldiers. But, don't think for a minute that this game is for kids. With lots of hidden passageways, bonus rooms and secret areas, this game combines the best we have seen in a Super Mario type adventure, only better!

A couple of months ago Sega brought out a spectacular new game for the Genesis. One would think that a game centered around Mickey Mouse would be aimed at the younger audience, but as we all found out Sega's Mickey turned out to be a programming masterpiece. With some of the best animation ever done in a video game, plus very challenging game play, Mickey quickly got the respect from all players.

Now, Mickey has been converted to the 8 bit Master System and, like Ghouls and Ghosts and Dick Tracy, Mickey has not suffered tremendously from the downsizing even though the memory has been cut in half! Gone in the process though, are the multi-level, finely detailed, backgrounds and some of the cute frivolous animation. But, the plot remains the same - rescue Minnie from the witch's clutches, and, many of the levels like the Black Forest and the Toyworld still retain the original theme as those in the Genesis cousin. The power-ups, like the Mickey Mouse ears, and other bonuses are here also. The bosses are new and have been redesigned to fit the capabilities of the 8 bit machine. However, most importantly, Mickey comes off as a fun, well playing game for players of all ages and it also shows the dedication that Sega still has in the Master System. The cart should please the die hard Master System users who haven't upgraded to the 16 bitter.

Spring is in the air in Vera City — the sun is shining and the mice are happily scampering about. That is, until clouds blot out the sun and a witch named Mizrabel sweeps into town. After plucking Minnie Mouse from the meadow, the wicked witch cackles and flies away with Minnie in her grasp.

In hot pursuit, Mickey Mouse scampers after them until they reach the Castle of Illusion. At the castle gate, Mickey meets an old king who warns him that Mizrabel plans to steal Minnie's beauty for herself. The king tells Mickey he must find the seven gems of the rainbow to rescue Minnie. In Castle of Illusion: Starring Mickey Mouse, you play the most famous rodent in history. Your quest for the gems and Minnie Mouse will take you through five worlds of illusions, each entered through a different door in the castle.

Castle of Illusion is not a violent game, but you'll still encounter numerous foes. There are three ways to get by these enemies — jump over them, throw items you've picked up, or master the bounce attack. To bounce, press button C to jump; when Mickey soars over the enemy, press button C again to attack.

The first door in the Castle of Illusion leads to the Enchanted Forest. In this neck of the woods, trees dance, tulips spit deadly seeds, and spiders swing from sticky webs.

The second door leads to Toyland. Avoid the clowns and marching soldiers, watch out for toy airplanes, and keep an eye on your power gauge. Every time you get hit by an enemy, you'll lose energy.

Open the third door of the castle and you'll find yourself running across crumblingbridges, and dodging flying bats and bonefish. The boss of this world is one of the toughest in the game.

Another door leads to the castle's library, where huge books and giant bookworms fill the shelves. There are secret rooms if you can find them, and a milk bottle which contains a sweet surprise.

Mickey Mouse was Walt Disney's first cartoon character, but the graphics and animation in this game would almost be at home on today's movie screens. An enchanting story, colorful animation, and a lack of violence make it an excellent game for youngsters — but like most Disney cartoons, Castle of Illusion will attract fans of all ages.

Aero the Acro-Bat
You play as bat Aero, who have to stop the mad scientist Edgar Ektor, who is trying to rid the world of amusement and fun.

Daffy Duck in Hollywood
It's a 2D platform game starring the Looney Tunes' most famous duck. Players can choose to start on any of the game's stages and go through them in any order.