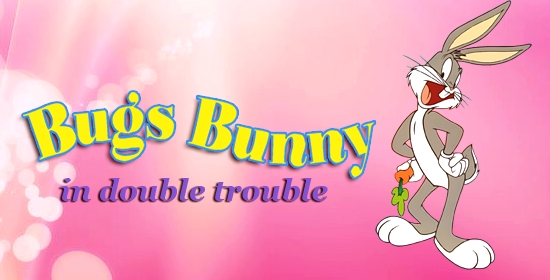 It's twice the fun. Twice the thrills. Twice the craziness. That's right, it's The Bugs Bunny Crazy Castle 2. But Bugs isn't getting the royal treatment. This "looney" new adventure on the Nintendo Game Boy has Bugs being chased by the whole Looney Tunes gang. The Tasmanian Devil, Yosemite Sam, Wile E. Coyote and other crafty characters. There are 28 huge and multi-level rooms. Giant catapults. Invisible traps. Awesome sound. More than enough to keep you and Bugs hopping. Will Bugs succeed in his crazy attempts to rescue Honey Bunny? If you're a Game Boy player, that's up to you. Their future is in your hands. So the sooner you scan the better. The Bugs Bunny Crazy Castle 2. Even better the second time around.

What's up, Doc? Not much, if you're playing Bugs Bunny: Double Trouble. Though Bugs gives you eight adventures, the shoddy level designs and sluggish controls bring down the Fudd, er, Fun Factor.

As the wascally wabbit, you must duck, dodge, throw, run, and jump through levels Controlw.se, Bugs where you're chased by costars like Daffy, Marvin the Martian, and Yosemite Sam. Graphically, the game is solid. Bugs and friends are well animated and complemented by bright and varied backgrounds. The sounds are good, but the music is grating, and you don't get one single voice effect.

Controlwise, Bugs is aptly named. Navigating some areas becomes frustrating, and the quick timer and poor scrolling make you the victim of many cheap attacks. Fans of Warner Bros, cartoons with some extra bucks might give Bugs a rent; otherwise, this silly rabbit's tricks aren't for discerning gamers.

Hey, Doc, Bugs might be available by now, and he scored at E3 with cool rendered 3D graphics. Each level of this action/adventure game is based on a classic Looney Tunes cartoon. You'll face old favorites like Daffy Duck, Elmer Fudd, Wile E. Coyote, and Marvin the Martian (with K-9, too).

Bugs Bunny's adventures have always been a lot of fun because Bugs Bunny is daydreaming about troubles. The game meets this condition in full. Mad bustling, chasing and silly tricks are what you will find here controlling Bugs and his friends in this game.

So, after a hard day Bugs decided to take a nap and had a dream, but not about carrots. This dream has Bugs' double trouble- his arch enemies Hunter Isamity Sam and Marvin Martian, intending to finish the poor rabbit in the land of dreams. But Bugs is a tough guy with three alive and the inborn ability for lucky escape.

The game consists of two sub levels: one is easier, the other is harder, you may choose their succession. The graphics and music are OK but the game action is sort of chaotic, what could be expected).

You can't deny it. Bugs Bunny is the O.G. anarchist. While Mickey Mouse was getting into good, clean trouble with Donald and Goofy, Bugs was at the other end of the forest screwing with mad scientists, smooching robot girl bunnies and convincing Elmer Fudd that it was really duck season and what he really wanted to do was shoot his friend Daffy. He was truly "deth-spicable."

In his new 16-Meg cart from Sega, Bugs has definitely stayed true to his troublemaking roots. In fact, there's even a stage in which your goal is to change every "Rabbit Season" sign in the forest to a "Duck Season" sign. If you're successful, Elmer pops a cap in Daffy's behind!

Not satisfied with being an ornery cowboy,Yosemite Sam has apparently gone to Mad Doctor Medical School and built a giant robot. He needs Bugs' brain to make it get up and go. To escape this evil (and possibly illegal) scheme, Bugs has to undergo a series of cartoon labors. It's looney stuff, my friends.Very, very looney.

Why, that wascaly wab-bit is at it again, along with pal Daffy Duck, against villains like Elmer Fudd, Yosemite Sam and the big red furry guy. It seems Yosemite Sam has hatched a wily scheme and wants Bugs Bunny's brain! With Gosemer in hot pursuit, our favorite rabbit must complete different tasks and do what Bugs does best; that's to say, make his pursuers look like the bumbling oafs they are.

The graphics are colorful, but the overall color and look of the game seem a bit bland.The characters are well animated and are about par for what's expected of cartoon-licensed games.That also means Bugs suffers from the pit-fall of smooth animation in fast action games, which results in tougher controls.You'll get adjusted to it, but it causes a lot of deaths early on.

There are no continues in Bugs Bunny, which makes it a welcome challenge. The tasks Bugs has to complete are interesting, but towards the later levels, it all seems a bit strained and somewhat predictable.The music is the standard Merry Melodies riffs, with some original level music, but what I wanted more of was voice. With 16 megs, you'd expect the bushy-tailed one to spew out some witty retorts, or Daffy to sound like a loon. What about some menacing sound snippets from the bad guys? I guess that Sega would probably have to pay more to use the real voices and that the cost would be passed on to consumers. Hey, it's a brand new, 16-meg game for $49.95, so a little compromise isn't too bad.

The bottom line is the fun factor of a game, and I must say that the old grey hare has still got plenty of charm left--enough to elevate a game with its fair share of problems into something enjoyable. I liked this game and I would be more than happy to add Bugs Bunny in Double Trouble to my ever-growing Genesis platform game collection.

In the first stage, it's important to know how fast Daffy moves and when to jump in relation to his (incredibly high) speed.This way you can avoid getting hit.The best way to gauge this is to wait for Daffy's upper body to streak across and then jump straight up, then immediately pushing in the direction he came from.This way, you're travelling upward in the opposite direction, taking you as far way from him as possible.

An American Tail: Fievel Goes West
In the lively animated video game, based on the popular movie, you will guide the little mouse who has to find his way through the Wild West in search for his family.

Tom and Jerry SNES
The famous cartoon cat and mouse duo, Tom & Jerry have appeared in various video games during their later years of cartoon entertainment.