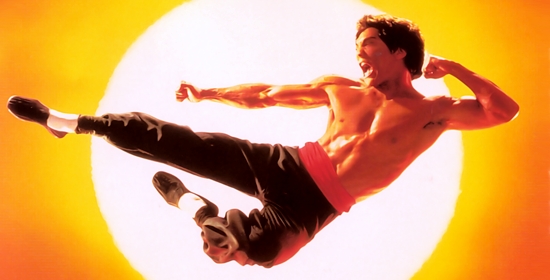 More than two years after the movie's release, Acclaim finally brings Dragon: The Bruce Lee Story home to Genesis owners. Unfortunately for fighting fans, the game is as disappointing as the movie.

In this side-view fighter, up to three players can battle it up, or up to two players can work together to combat Bruce's legions of enemies. The Story mode follows the stages of the great martial artist's life, from the dojo to the movie studio. To progress, you must defeat all Lee's adversaries in an episode. While you're in combat, the object is not only to win, but also to collect chi. The more chi you collect, the better Bruce fights.

Controlling Bruce can get rough. Initially, you'll helplessly watch him jump and flip all over the screen while your opponent sizes you up for the big blow. But once you get the hang of it, the moves are simple to perform. You'll be kicking up a storm in no time.

The graphics are average at best, devoid of the detail and imagination needed to fuel a fighter these days. The sound and music lack intensity. They're missing in action altogether in the eerily mute movie sequences.

There's nothing special about this fighter, other than the fact that it's about Bruce Lee. This martial arts demigod and his fans deserve better.

Bruce Lee was one of the greatest karate experts of all time. Now you have a chance to fight as the Dragon. You have a multitude of kicks and punches at your disposal. Some of Bruce's classic moves are yours to beat the heck out of your enemies. Power-up to go into Fighter or Nunchaku Mode. Bruce even makes his famous "Waa!" sound when he wins. Choose from either the Battle or Story version. This gives you the opportunity to follow the Bruce Lee story as told by the recent movie. If you enjoy a good kung fu movie, you'll have fun kicking the snot out of these guys.

Plenty of bone-cracking kicks to make this game exciting.

Trying to hit some of those punches on the controller. It's harder than you think!

When Bruce stomps on your head and gives it a good twist.

Over a year ago Virgin had planned to release Dragon, but couldn't get it out. Acclaim bought the game and brings yet another movie game to the home system.

Unfortunately, Dragon is the most simplistic side-to-side fighter I have ever seen. The characters and backgrounds look nice, but a year ago this type of game was stale. The fights are slow, repetitive, and entirely too long. With punches and kicks only hit from ultra-close range and annoying control features, Dragon is a real pain to play. There is a story mode that features scenes from the movie (ooh, surprise), which is yet another good reason to hate this game.

The one new feature is the 3 player battle, which would be fun if the fighting wasn't so pitiful. Bruce Lee fanatics are the only people who are going to get much pleasure out of this one.

The film Dragon showcased Bruce Lee's power. On the SNES, however, Bruce looks weaker than Lester the Unlikely.

Ten stages trace the film's plot, from Bruce's brawl with the sailors through the demonic finale modeled after Enter the Dragon. Although you can earn special weapons and techniques, like nunchakus, this shallow game is more of a beat-em-up than a true fighter.

Mediocre sprites, animations, and backgrounds provide the visuals, but don't expect to see blood. Decent martial arts music carries the audio, but the fight sounds are lame. Fans of the film may want to rent Dragon. All others should stick to the fighting legends of the gaming world.

ProTip: When the fight moves to the alley, focus on beating the first chef you fought inside.

Perhaps many of you have watched the film about the life story of well-known fighter Bruce Lee. And so this game is based on this film. The game itself is a fighting where the fights occur in film locations; for example, the first duel takes place in that very bar where your enemy will be the seaman.

The set of punches is not so large, but the pure kun fu techniques are well observed in Bruce Lee's movements. The most interesting part of the game it actually the story of our glorified fighter's adventures. But the opportunity of fighting sparring duels is available as well.

Not so interesting game but maybe fans of bruce lee or kung fu will like it.

Tuff E Nuff
The game can be played with one to two real players. The game starts off with only four characters, but a Boss Code can unlock the other seven characters. The game has three modes: Story Mode, 1-Player to CPU Mode, and Multiplayer Mode. The fighting engin