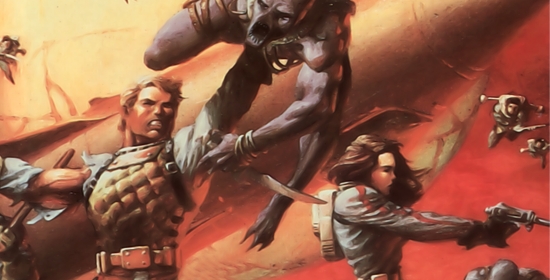 Welcome to the 25th Century... The corrupt Russo-American Mercantile (RAM) has created a planet-busting-weapon called the Doomsday Laser. At the same time 21st-century legend Anthony "Buck" Rogers has defrosted from a deep freeze. You and your team of Buck wannabies join the rebel New forth Organization (NEO) to help, puck present the RAM from shafting Earth.

In order to fulfill your mission you assemble a band of up to six characters from various space races including Humans, Tinkers, and Desert Runners. Each member of your team is trained in a special profession such as Rocket JocK, Medic, Rogue or Warrior. They can also learn supplemental skills like Rocket Piloting, Programming, Stealth, Demolition, and First Aid.

ProTip: Your party should consist of one Rogue, two Desert Runner Warriors, one tinker Medic, and two Human Pilots. Be sure to train two characters other than your Medic with the First Aid skill.

Whether on foot or in the air, you'll have-a wide variety of atom-blasting weapons at your disposal (if you can find, steal, or purchase them, that is). In land-based combat you'll whip out Pistols, Swords, and Launchers, and during ship-to-ship battles you'll fire up Lasers, Missiles and Plasma guns. Other items include Armor, Goggles, Demolition Charges, and Antidotes.

Arm your Desert Runner with a Crossbow pronto.

Buck Rogers: Countdown to Doomsday by Strategic Simulations and Electronic Arts is a classic example of RPG near-perfection. It's filled with fun and interesting graphics, killer weapons, scads of seriously nasty monster-types, and plenty of places to go and things to do. The repetitive non-stereo music needs improvement, but the sound effects make up the difference. Especially excellent is the two-part end fight. Even if you're unfamiliar with the Buck "space operas" of yesteryear, his game is a great place to start if you're ready to go where no Genesis gamer has gone before.

Forget the Sunday papers' Buck Rogers of yore. Forget Buster Crabbe, even Gil Gerard. There is no Killer Kane here, nor a Princess Allura. Nor is there a cute robot or a slightly befuddled professor. If the truth be told, in this sprawling adventure game, even the legendary Buck himself is mostly offstage. He and Wilma Deering may show up as NPCs (nonplayer characters) in the course of the game, if the player is prepared to stay with it long enough. But Buck's presence for much of the game is more hearsay than tangible.

What does remain of the original is its' chronological locale in the 25th century, a time when Mars and Venus have been terra-formed, and thriving cultures have evolved there, as well as on Luna, Mercury, in the asteroids and even floating on the edges of Jupiter's gas clouds. Rocket ships readily travel throughout the solar system. Strange new genetically engineered life forms (Gennies) are tailored for a variety of environments and purposes, including war.

As with most of SSI's major works, the perspective is primarily military, and the player is expected to assemble an elite commando team that will, eventually, defuse a planet-shattering attack from the enemy. As Countdown to Doomsday is expected to be the beginning of a series, the enemy-alliance RAM will almost certainly not meet final defeat at this time.

The selections are enormous for characters' skills and careers and for weapons and other equipment. For example, among the manuals (a rule book, log book and system data card, plus a separately available clue book) are endless pages describing the various available skills. Some are specific to particular careers, such as those needed by medics, while others may be shared, such as the ability to use a jet pack, shared by both rocket jocks and warriors. All skills are rated by points, as are the standard set of ability ratings for strength, dexterity, constitution, intelligence and charisma, plus ratings for wisdom and tech ability. As you might guess, the weapons list is also extensive, forming the largest portion of the "gear" listings.

There are different screen views depending on locale and activity, such as 3-D and area views for moving through towns, rocket ships, etc., combat views for the incessant battles, map-like overviews for crossing a planetary surface, and even a solar map view for travel between planets and outposts. One note of reality is that the planets are indeed moving in their orbits around the sun. The rockets move quickly, but be on the lookout for pirates and enemy warships!

One element that the player does share with Buck Rogers is the need to learn to deal with a new and frequently hostile environment. This game is for players who have the time and the inlination to commit to getting involved in the workings of a detailed, military-oriented adventure in a novel-length story that could reach epic proportions.

It is time for us to jump forward a few centuries and join Buck Rogers and his crew to fight in this new role playing game based on the popular hero. Choose your players' attributes, race, skills and more as you prepare your quest to fight fierce monsters in battles to the finish.

Play the part of the famous sci-fi character in this RPG as you journey through the stars in search of evil hoodlums that are causing havoc in the solar system.

Play the part of the popular superhero as you patrol the outer limits of our galaxy. Blow away any enemy who challenge you because it's kill or be killed!

Awakened from your centuries long sleep in the 25th Century, you are Buck Rogers, ancient military hero and symbol of earlier times. As you are brought up to date, you decide to join the New Earth Organization (NEO), to fight for your home planet.

Once you had fought in the cold war, a pilot sent into outer space to destroy a Russian weapons platform. You were successful, but your success destroyed the planet, as nuclear war was launched, and you went into a centuries long cryogenic sleep, abandoned by the people who could not retrieve you. In the centuries that you slept, Earth colonized the solar system. There are large groups of people on Mars, Venus and Saturn. The colonies once existed to bring resources back to an Earth that had problems sustaining itself.

But the intervening centuries brought a power shift. Now Earth is at the Mercy of the interstellar alliance RAM—formerly the Russian-American Mercantile, but now the superpower, based on asteroids surrounding the planet Mercury. Mercury exploits the Earth for resources, at the expense of Earth's population. Earth has fallen into barbarism, except for one small light -- the New Earth Organization (NEO).

These "rebels" consider themselves freedom-fighters, and they are fighting for Earth's freedom from the interstellar powers. Call it patriotism, if you will, but you join them -- the only person alive who can remember when Earth was supreme and healthy.

You assemble a team, and begin your attack...

Choose a party of six adventurers from three races (human, desert runner and tinker), select their gender, career (rocket jock, medic, warrior, or rogue) and "roll" for various attributes such as strength, dexterity, constitution, charisma and technology. Characters can also specialize in skills that can help the party as they embark on their intergalactic adventure. Some of these skills include programming, first aid, repairing rockets, zero-gravity maneuvering and various others.

There are two main viewpoints used within the game: an overhead land-based and first-person ship perspective. Combat on land involves moving a limited amount of spaces (depending on your character) and choosing to either attack, defend or use one of fifty different items found in the game.

Buck Rogers - Countdown to Doomsday also features battery backup to save up to three games in progress, and includes an eighty-page manual complete with hints and maps. Is the game moving too slow for your tastes? Players can increase or decrease the game's speed to one of five different settings.

Metal Marines
After a massive Anti-Matter chain- reaction accident, the shattered Earth is in chaos. The only order is a cruel empire ruled by a former Federation general. This dictator's only opponents are you and your Metal Marine warrior robots.

Syndicate
Syndicate is a Sci-Fi Real-Time Strategy game, developed by Bullfrog Productions and published by Electronic Arts, which was released in 1994.